Our club has several accredited coaches as well as a number of very experienced players who are more than happy to help you develop your skills and improve your game.

All new members are allocated a coach when they join the club. Our coaches will ensure you have enough training to provide you the confidence to represent our Club in pennant competitions.

Please approach any of our selectors to arrange an introduction to a coach.

Lawn bowls is usually played on a large, rectangular, precisely levelled and manicured grass or synthetic surface known as a bowling green which is divided into parallel playing strips called rinks. In the simplest competition, singles, one of the two opponents flips a coin to see who wins the “mat” and begins a segment of the competition (in bowling parlance, an “end”), by placing the mat and rolling the jack to the other end of the green to serve as a target. Once it has come to rest, the jack is aligned to the centre of the rink and the players take turns to roll their bowls from the mat towards the jack and thereby build up the “head”.

A bowl may curve outside the rink boundary on its path, but must come to rest within the rink boundary to remain in play. Bowls falling into the ditch are dead and removed from play, except in the event when one has “touched” the jack on its way. “Touchers” are marked with chalk and remain alive in play even though they are in the ditch. Similarly if the jack is knocked into the ditch it is still alive unless it is out of bounds to the side resulting in a “dead” end which is replayed, though according to international rules the jack is “respotted” to the centre of the rink and the end is continued. After each competitor has delivered all of their bowls (two bowls each in fours), the distance of the closest bowls to the jack is determined (the jack may have been displaced) and points, called “shots”, are awarded for each bowl which a competitor has closer than the opponent’s nearest to the jack. For instance, if a competitor has bowled two bowls closer to the jack than their opponent’s nearest, they are awarded two shots. The exercise is then repeated for the next end, a game of bowls typically being of Fourteen ends for Night Owls. 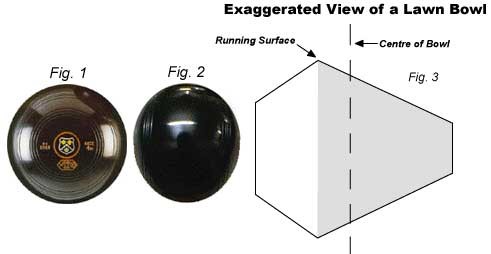 Bowls are designed to travel a curved path because of a weight bias which was originally produced by inserting weights in one side of the bowl. This is no longer permitted by the rules and bias is now produced entirely by the shape of the bowl. A bowler determines the bias direction of the bowl in his hand by a dimple or symbol on one side. They were originally made from ‘Lignum Vitae’, a dense wood giving rise to the term “woods” for bowls, but are now more typically made of a hard plastic composite material.

Bowls were once only available coloured black or brown but they are now available in a variety of colours. They have unique symbol markings engraved on them for identification. Since many bowls look the same, coloured, adhesive stickers or labels are also used to mark the bowls of each team in bowls matches. Some local associations agree on specific colours for stickers for each of the clubs in their area. Provincial or national colours are often assigned in national and international competitions.

Bowls have symbols unique to the set of four for identification. The side of the bowl with a larger symbol within a circle indicates the side away from the bias. That side with a smaller symbol within a smaller circle is the bias side toward which the bowl will turn. It is not uncommon for players to deliver a “wrong bias” shot from time to time and see their carefully aimed bowl crossing neighbouring rinks rather than heading towards their jack.

When bowling there are several types of delivery.

“Draw” shots are those where the bowl is rolled to a specific location without causing too much disturbance of bowls already in the head. For a right-handed bowler, “forehand draw” or “finger peg” is initially aimed to the right of the jack, and curves in to the left. The same bowler can deliver a “backhand draw” or “thumb peg” by turning the bowl over in his hand and curving it the opposite way, from left to right. In both cases, the bowl is rolled as close to the jack as possible, unless tactics demand otherwise.

A “drive” or “fire” or “strike” involves bowling with force with the aim of knocking either the jack or a specific bowl out of play – and with the drive’s speed, there is virtually no noticeable (or, at least, much less) curve on the shot.

An “upshot” or “yard on” shot involves delivering the bowl with an extra degree of weight (often referred to as “controlled” weight or “rambler”), enough to displace the jack or disturb other bowls in the head without killing the end.

A “block” shot is one that is intentionally placed short to defend from a drive or to stop an oppositions draw shot. The challenge in all these shots is to be able to adjust line and length accordingly, the faster the delivery, the narrower the line or “green”.